The communication between Fell and Amatullah fell on deaf ears, his attention focused on the rising storm. An unsettling feeling rested in his stomach, large tail lowering to rest uneasily at his ankles as his ears drew back in a submissive manner. Blue eyes skipped over the tree tops as more looming clouds snuffed out the bright sky that once basked it warmth, leaving Oddey with a shiver down the length of his spine.
He met Fell's gaze, hesitating before he spoke.
"This storm seems to be moving in quite quickly," He paused briefly. "Do you think we should still hunt? I don't think we would have enough time to chase and catch prey just the two of us." Oddey finished, his voice just above a whisper. 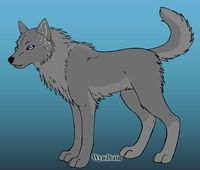 Fell heeded Oddeys words. "Amatullah wanted us to lure her prey into the traps she made." Fell explained. Then she glanced up again, warning growing ever more. "I'm sure we will hunt, to be honest." But she was hungry. "But one little hunt couldn't hurt, we just need to be quick."

Oddey bit back his words, processing them before he dared to speak. The last thing he wanted was to upset his new found leader, and friend, but he truly believed that their chances of successfully catching food was slim. The storm was practically here at this point, and it seemed it wasn't about to leave any time soon.
He stood there silently, gaze distant as he struggled to reach a decision.
"I mean no disrespect Fell, but... there's got to be mere minutes before this storm lets loose, not to mention it's probably scared most prey underground or in hiding." He spoke slowly, averting his gaze as he prepared for the worst. He never liked conflict.

The member 'Bluebird98' has done the following action : Dice of Destiny

The game trail that lead forth brought slight ease to Oddey, but he still wasn't completely sold on the hunt. He met Fell's gaze, inhaling slightly as she prompted to move east. His thoughts drifted to Amatullah momentarily, wondering how she would hold up in the weather with her injured limb. She didn't even know where him and Fell were headed, leaving her in the dark. On the flip side, if he left to find her, that would leave all three wolves on their own in this storm, if Oddey never reached Amatullah.
Involuntarily, he released a small whine of discontent, feeling the pressure of the choice in front of him.
"What about Amatullah? If we head east, and something happens, she won't know where we are." He decided to say, the tip of his tail flicking uneasily. "We have to at least warn her."

With the third party notified, at least to his knowledge, Oddey felt more at peace with his final decision. It would be too risky for each wolf to be on their own the growing storm, so he gave a gently nod and glanced towards the game trail Fell had previously noticed. It was obvious the trail was used frequently, but without a prominent scent, the group would be unable to determine what used it recently. Ebony nose twitched as he drew in quick, deep breaths, trying desperately to pick up something other then the damp air. Turning his attention back to his Arch, he met her gaze steadily as he began to calm slightly.
"East you say? Hopefully prey won't be far off." He said with slight enthusiasm giving his short, thick grey coat a shake, he took a half step back. "Lead the way."

The canine trailed closely behind the other as they moved along the trail, keeping his attention on any signs of live prey. He inhaled deeply, praying that one of them would be able to pick up on something soon.

The member 'Oddey' has done the following action : Dice of Destiny

His shoulders slouched forward as the wind brought nothing his way, hope slowly drifting away. Determined to keep on the task, Oddey kept alert, halting as Fell stopped in front of him. Peering around her, his gaze fixated on what she had found, joy flaring up in his chest. "Tracks?" He asked rhetorically, padding to stand beside Fell. The presence of a second pair of tracks, wolf ones, was worrisome, but hunger was biting at his stomach after having hunted for Amatullah and now the trek they've made for this one.
"Maybe we should follow them. At the very least, we will get the left overs of what they catch. Best case scenario, we help with the hunt and get the kill." He spoke his mind, growing quite eager at the thought of a large meal.

Oddey, despite his sociable nature, kept close to Fell as they followed the trail of prints. It wasn't long before he could hear the low mumble of another wolf, but couldn't quite place where they were. Pinning his attention ahead, he strained to find them with attentive eyes and ears.

The member 'Oddey' has done the following action : Dice of Destiny

His ears twitched as a males voice flowed towards him, clearly upset and strained. Oddey nodded as Fell warned him, knowing the risk of the situation but also growing excited at the thought of meeting another fellow canine. He lowered his lean frame to a stalking position, piercing blue eyes flicking across the forest ahead of him as his ears settled against his skull. He prayed that he would be able to spot this wolf before it spotted him.