Personality
Strong-willed personality, driven and confident. Thrives with the company of others, preferring to live in groups but can survive on her own. Takes a motherly attachment to young wolves and pups and will put her life on the line for those she loves. Loyal, fair, leader type and will fight for the underdog. Despite her bubbly exterior, Dion holds secrets close to her heart, ones that none know.

History and Family Ties
Mother: Rae
Father: Sancus
Siblings: N/A
Distant Relatives: N/A
History:
She was raised and trained beneath her father, the Arch of her pack, her mother having passed away only weeks after she had been born. Her childhood was spent learning to fight, hunt, track and to lead, speaking with more formality then most pups her age. Dion found her days endlessly tiring, but in time began to appreciate what her father had to offer the young wolf. As she aged, her knowledge grew as well as her independence, leading to her dismissal from her birth pack to begin a new life among others.
On her own, Dion was soon to find herself amidst a new group as she begun her new life, proving herself to the pack with her well trained talents. There, she continues to develop her skills and sociability, eventually finding a love in the Beta. Life was plentiful, and with the passing of the leader, her and her love became the leaders of the group, but soon everything changed. A rival group attacked during the night, the fight ending with only a few survivors from Dion's group, one of the fallen her past love.
Struck with grief and deeply injured on her right shoulder, she ran, carrying not only the memories and nightmares with her, but the offspring of her dead love. The physical and mental damage from the battle lead to the miscarrying of the litter, yet another secret she found herself promising never to share. From then on, Dion has been on her own, grieving and lonely, bearing a large scar on her right shoulder as a memento of her dark past. 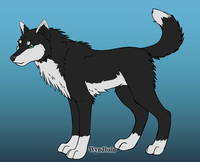